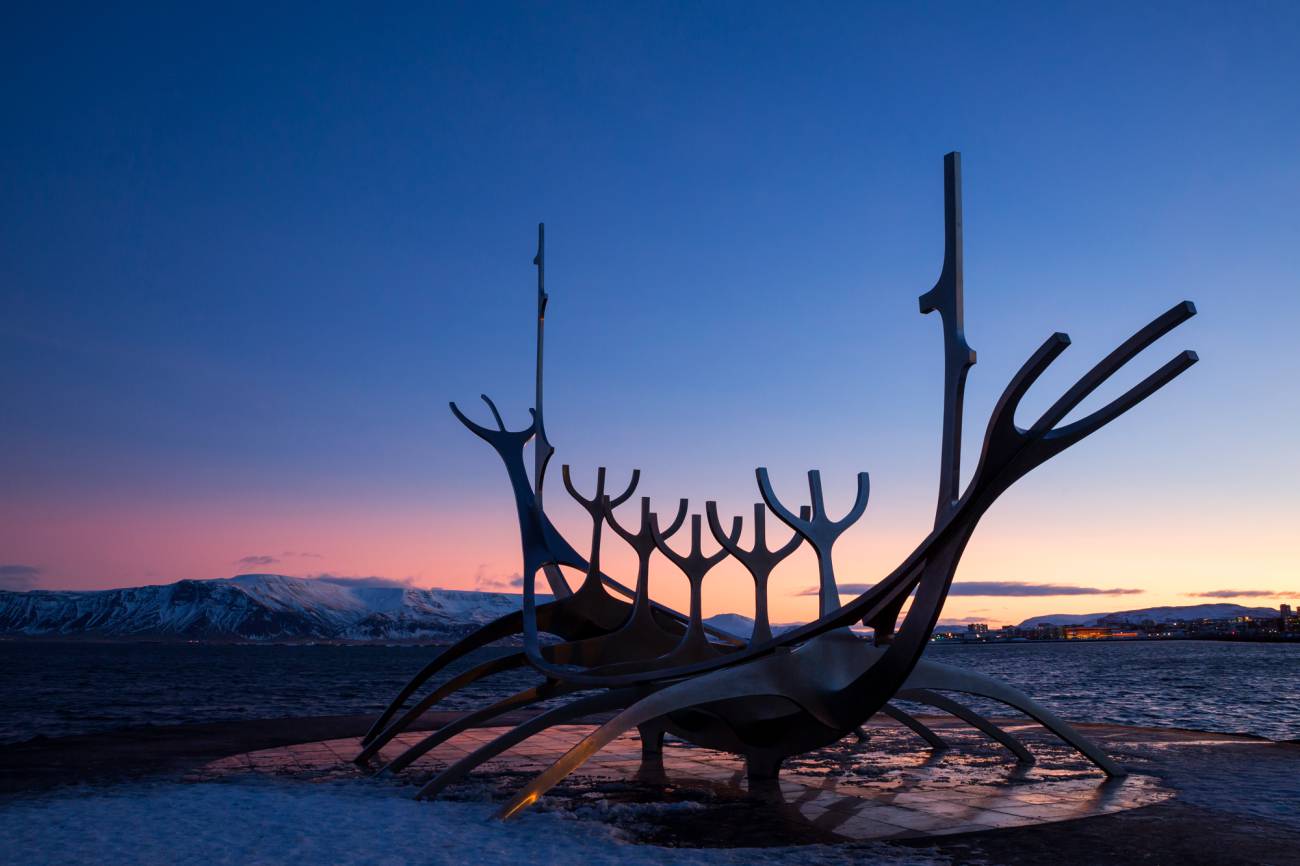 Ingólfur Arnarson was one of the first settlers in Iceland. The Viking left his homeland Norway with his family and landed in Iceland in 874. In accordance with an old custom, he threw three pillars made for a raised hide from his former home into the sea and swore to build his new home wherever the pillars were washed ashore. After searching for two years his slaves found the pillars in Reykjavík. When Ingólfur reached this spot, there was smoke everywhere. He named the harbour Reykjavík, which means “smoky harbour”.

Until the 18th century there were very few people living in the region. Today there are 120,000 people in Reykjavík and a further 85,000 in the five suburban towns. The capital is located on the Atlantic coast in the Faxaflói Bay. Due to the Golf Stream, the winters are mild and the summers cool. The city´s landmark mountain Esja is situated about 10 kilometres north and gives the capital a rural feeling.
In former days Reykjavík was mainly a fishing town, today you´ll find many service oriented businesses as well as fishing and high-tech industries.

Reykjavík is known for its many museums, beautiful buildings, the university and its music scene and the nightlife.

Among the most beautiful buildings is the concert hall Harpa, official seat of the Icelandic symphonic orchestra and the Icelandic opera. Also well worth seeing is the cathedral Dómkirkja and the Lutheran church Hallgrímskirkja, which has a tower that can be visited. An elevator takes you to the top, where you have a fantastic view of Reykjavík. The warm water tank Perlan in the district of Öskjuhlið presents itself with a big glass dome, aluminium tanks and some other noteworthy sights.

The sculpture Sólfar, which is the presentation of a Viking ship, is near the Harpa. In the centre of the city you´ll find the Tjörnin lake, which is a habitat for geese, ducks, swans and other birds. In the surroundings are the town hall, the National Gallery, a cemetary and one of the countless churches in Reykjavík: the Fríkirkja.

Höfði, the official guest house of the Icelandic capital is very well-known ever since October 1958 when the president of the United States and the General Secretary of the Communist Party of the Soviet Union held their summit here.

You´ll find many possibilities to enjoy Reykjavíks cultural side. There is an unbelievable variety of art, culture and music in many galleries, museums, theatres, the concert hall, on the streets and in pubs. Every year the Icelandic Airwaves Music Festival and the cultural festival Menningarnótt take place, which have gained worldwide fame.

The Laugavegur is Reykjavíks shopping street with many exclusive stores and souvenir shops. In the evening the street turns into the city´s nightlife mile.

There are two seaports, the old port near the city centre, which is mainly used for touristic attractions, and the Sundahöfn to the east of the city, the biggest freight port in the country. Whale watching tours leave from the old port. You can catch salmon in the biggest river through Reykjavík, the Elliðaár. There is a golf course and several geo-thermal swimming pools.

The internet connection was disconnected. Please click here to get back to UNDRA 🗙