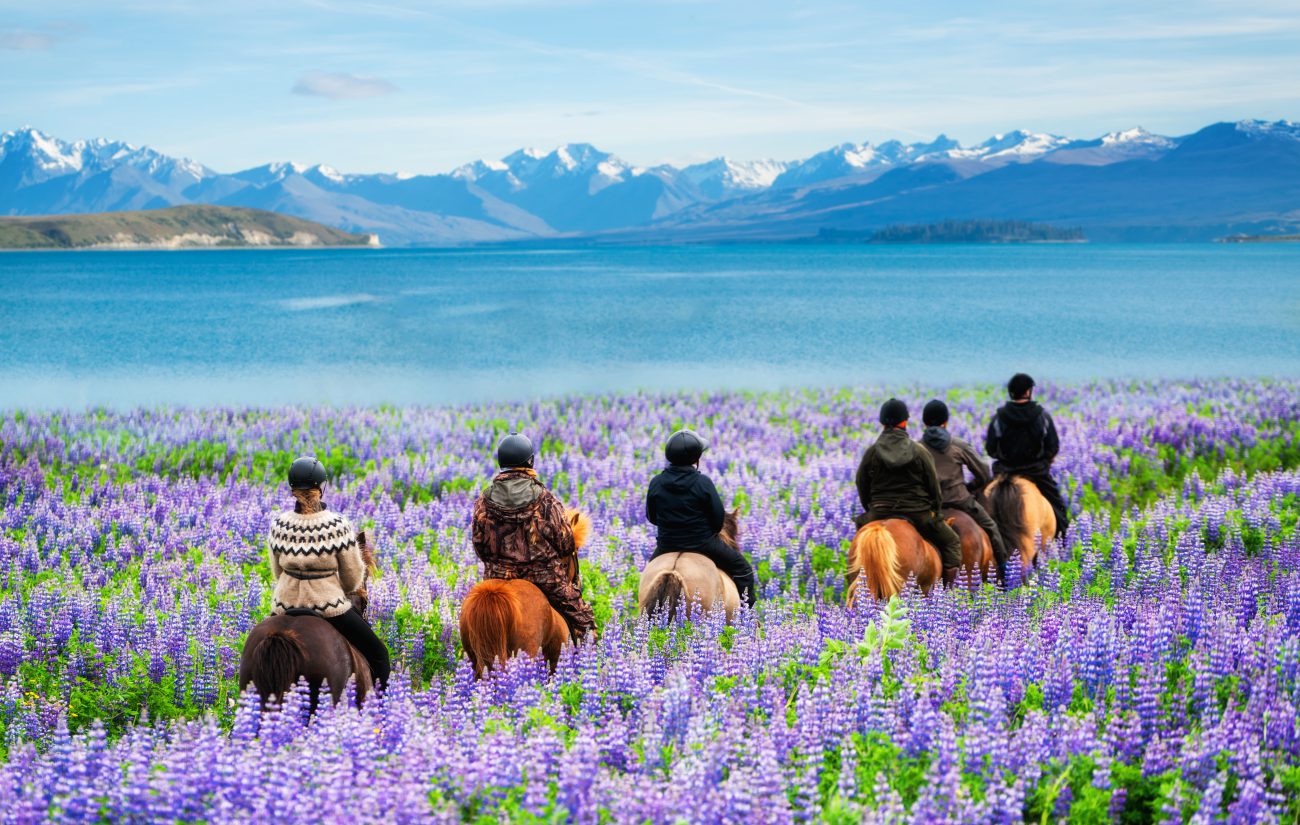 Kirsten Kujawa reports on her Iceland experiences and her 10-day tour.

About a riding tour in Iceland

“Actually, it all started as a child, because I always wished for a horse.

I started horseback riding when I was 8 years old. From the age of 15, with a lot of work and all my pocket money, I was finally able to afford riding lessons. But the dream of owning a horse became even bigger once the training began.

It was not possible until I was almost forty with an eight-year-old child and married and I got my first horse, an Icelandic horse named Hera.
The real journey began with her as I soon wished to see THE island of fire and ice, preferably from a horse.

For my 50th birthday, my family gave me such a trip and in 2015, the time had finally come.
We had formed a group of 15 people, including 5 men on horseback. A friend organized our 7-day tour with a free-running herd with Herdis and Eggert, now known as Dynhestar. We were taken from Reykjavik by bus to the Dalur between Svarfhol and Brekkulakur. Our guides and the herd were waiting there for us.

It was absolutely unforgettable from the minute we arrived! The landscape, lava as far as the eye can see, right from the airport. Spectacular!
Upon arrival, we received a warm welcome from Linda, our cook. In the first few days she took care of our physical well-being. There was traditional Icelandic cuisine – very tasty.

At our accommodation, which was rather simple, there were 3 hotpots. We used them extensively.”

“Day 2 started with a first 2-hour ride to get to know each other. We were each assigned a horse. Then the area was explored. It was exciting in a group of 15 riders. But the tour guides were terrific and Jutta, our experienced Icelandic Rider, had already passed on information about riding ability in advance. It was a great first ride, through river beds, past a swimming pool somewhere in the middle of nowhere. It was just fantastic. And the first of our men was in love with his mare!

Day 3 was our first day with the herd. It was thrilling and exciting. We all got our horses ready and got an introduction from the guides. This was: if we start with the herd, “stopping for a moment” is rather impossible.

After a rapid tölt, I managed to stop the group and herd anyways at the first gate. I had a 12 year old lively gelding named Loki. Everyone thought we looked great together, but I just could not handle his energy. So we did a horse exchange and continued.

Through valleys and over hills, over hill and dale, through water and over land. It was exhilarating. While our first ride lasted 2 hours, this one, with a change of horses after 1.5 hours, was already 3 hours long. We were all exhausted but happy.

Days 4 – 7 started like day 3. We always started after breakfast and were out with the horses for 4 – 7 hours. On average, the horses were changed every 1 1/2 – 2 hours. We rode through mudflats, on the beach, in the highlands, through rivers and over land! It was just great.”

“Of course there were also some spectacular moments. Eggert gave me a sensational ride on his “old” pace champion Darri on the beach for my birthday. He took me and accompanied me with his horse Draumur away from the group to the beach. He asked me if I trusted him. Of course I did. We were side by side. Eggert galloped ahead and I followed him. Then he gave the signal to Darri from his horse and Darri changed into pace. I had never ridden pace before. It took me a moment to realize that Draumur and Eggert were no longer with me and I looked around. There he was, some distance away from me at a full gallop. Only then I registered my own speed! I can’t describe what an amazing feeling that was. I felt like I could not stop smiling for the rest of the day.

On one of our days, a stallion accompanied us in his pasture. Since this was boring at some point, he boldly jumped over the fence to take a closer look at the mares. Herdis, Eggert and the farmer skillfully solved this situation.

Herdis and Eggert had divided us riders into the group that rode in front of the herd and the group that stayed behind. One rule: nobody rides in the herd, because there horses are allowed to behave like horses! I had ridden at the front of the group post of the tie. That had to do with my horses, who liked to go in the front. At the beach, I now preferred to ride behind the herd and to watch the freely running herd. Herdis recommended Stjarni to me for this, he would go both in front and behind. We reached the mud flats, Herdis gave the signal to start tölting and off we went. Stjarni was with me behind the herd for a moment and then decided that his place is in front of the herd. He went in a fast tempo tölt and passed the herd until he reached the front row with me. This was also one of the unforgettable experiences.

My conclusion from the riding tours is: If you are uninhibited and courageous, and can trustfully connect with the horses and the guides, as well as the other riders, there is nothing more beautiful than such a tour. Despite a previous riding accident, I have regained my self-confidence and simply lost my fear in strong tölt and pace. Thank you Darri and Stjarni, Herdis and Eggert. As the tour progressed, I also grew into the spirit of Loki.  His tölt was also fantastic!

It was the best vacation of my life. Our group was unique, Herdis and Eggert are fantastic and our group leader Jutta was great. We had great fun, while friendships were strengthened that already existed and others were formed. I am still grateful to my husband and daughter for this.”

Thank your, dear Kirsten, for sharing your experiences with us!