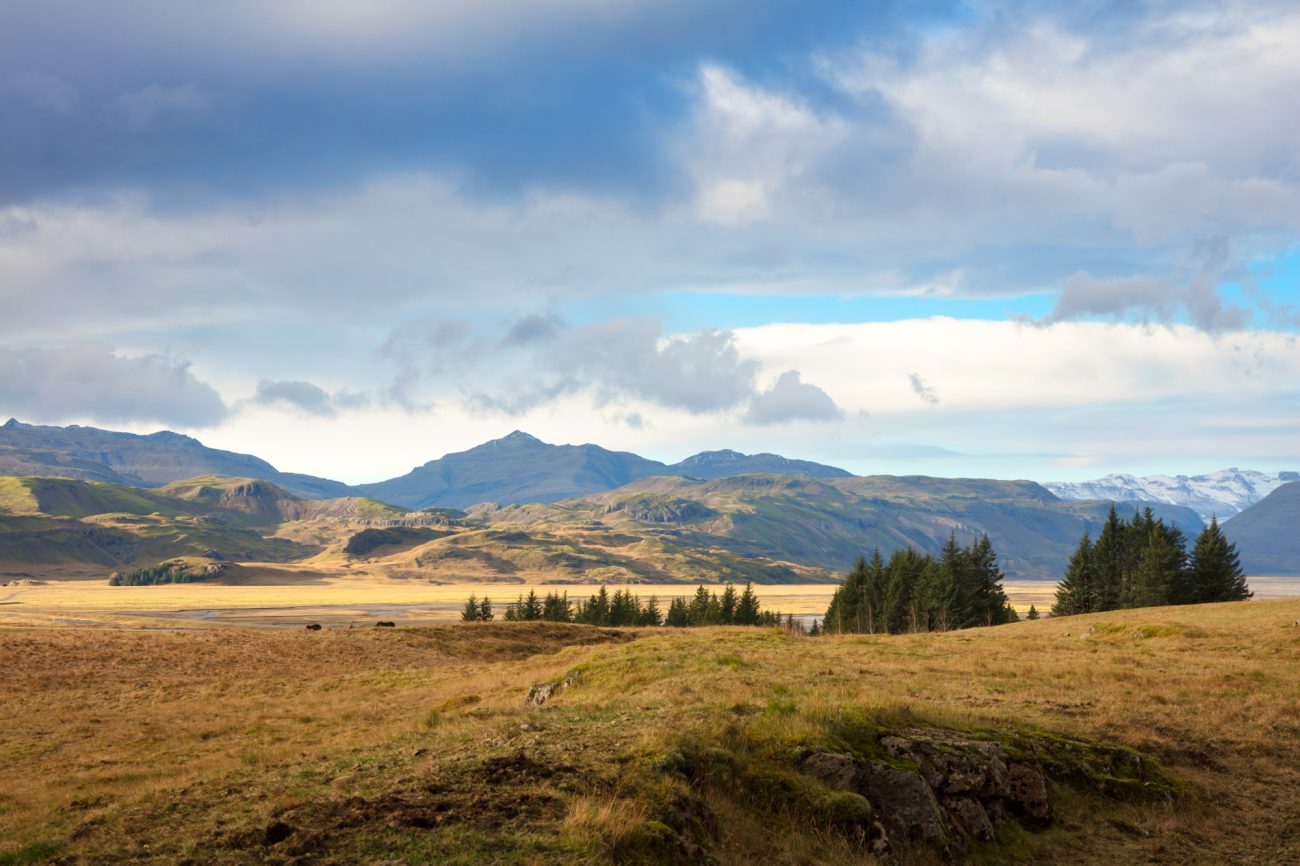 An excerpt from the book "Soul of Iceland" by Eva Frischling

The east of Iceland is marked by the Highlands, the largest forest in Iceland, fjords and small islands. Due to the natural ports there are many fishing villages and small coastal communities. Many native and foreign artists find inspiration in this impressive landscape with colourful cliffs and rocks and lush vegetation. The east has a long tradition in the arts. Today there are interesting art and music festivals happening all year round, such as the Lunga festival in Seyðisfjörður. This is the town in which the ferry from the European mainland arrives.

Nature lovers will enjoy the great hiking opportunities in the area as well as the various animals living on the wild, such as the Arctic fox, reindeers and countless birds.

Coming from Höfn you can drive by the community of Djúpivogur and cross the Öxi pass to get to the most important city of the region, Egilsstaðir. Because the mountain pass is very high, you can only use this route during the summer. In winter you must use the Ring Road and go by way of Breiðdalur. If you want to see more of the coast, use the route via the three fjords Stöðvarfjörður, Fáskrúðsfjörður and Reyðarfjörður, continue from there to Egilsstaðir or take a sidetrip from Eskifjörður to Norðfjörður. Because the land is so furrowed by mountains and fjords, you always have to return to the inland in order to reach the next fjord. This is also the case with the Mjóifjörður. After you have seen all these fjords and towns you reach Egilsstaðir. From here you can either turn inland toward the Highlands or drive to Seyðisfjörður. In order to get to Borgarfjörður you have to take a journey of 70 kilometres. The last fjord in the north is the Vopnafjörður. From here you can explore the north of Iceland on the 85th street via Bakkafjörður. If you want to leave the east of Iceland by the Ring Road from Egilsstaðir, you can go straight pass all the northern fjords.

The first community on the way from Höfn via Egilsstaðir towards the north is Djúpivogur. Three fjords and several small islands belong to this area. The main town, with the same name, is situated on the eastern tip between two fjords. The landscape is marked by mountains with a height of over 1,000 metres and a volcano that erupted about 7 million years ago and is no longer active today. Djúpivogur is known for its fishing culture, the trade houses – to this day the red trading house Langabúð exists – and for the many birds. During the summer you can take small ships to the island Papey and watch various birds and sometimes seals. The sculpture Eggin í Gleðivík consists of 34 eggs, each representing a local bird species. The biggest egg is dedicated to the official bird of the community, the red-throated diver. The town Djúpivogur also offers an art museum as well as a museum of local history.

If you take the route via the Ring Road and not across the Öxi pass, you reach the rural community Breiðdalur, the “broad valley”. The valley is known for the many beautiful hiking paths between the high mountains and the small green forests. In the main town of Breiðdalsvík you´ll find a geology centre, a few accommodations, nice places to eat and you can buy various arts and crafts.

Shortly after leaving Breiðdalsvík behind, you have to decide if you want to cross the valley on the Ring Road directly to Egilsstaðir or if you want to experience a lot of nature and an incredible stone museum while traveling along three fjords.

The first of the three fjords is named Stöðvarfjörður. In a small town with the same name you´ll find a petrol station and you can have something to eat and drink a cup of coffee. The highlight of the entire area is the stone collection by Petra Sveinsdóttir. Follow the sings to “Steinasafn Petru” to get to this private collection. An unbelievable amount of stones and other objects are presented to the visitor. A great tip for really everyone, regardless of a specific interest in rocks.

Next on the route is the Fáskrúðsfjörður. The town with the same name is a fishing village. Between the years 1880 and 1920 there were French fishermen near the fjord. To this day there are still some bilingual street signs and in the summer the “French Days” are celebrated.

There is a tunnel, which opened in 2005, to get from Fáskrúðsfjörður to Reyðarfjörður. This is the longest fjord in east Iceland with a length of over 30 kilometres. Because the area was ideally suited for a port, this was an important regional trading centre as early as the beginning of the 20th century. During the Second World War Reyðarfjörður was occupied first by the British and then by other allied armed forces. Today you can still see some remains from the occupation and there is a war museum. The biggest employer in the area is an aluminium plant. The raw materials are brought by ship, processed and then exported. A controversial dam was built to provide energy to the plant. Besides a shopping centre and a bakery there is a guest house, a hotel and a restaurant.

From Reyðarfjörður you can either drive directly to Egilsstaðir or you can take the 40 kilometre long road across the Eskifjörður to Norðfjörður.

Eskifjörður is a small and charming fishing village. It´s a nice place to spend the night, eat, discover the landscape by boat or explore the boat house and a fishery museum.

In Norðfjörður you´ll find more than expected. The town of Neskaupstaður is located amidst a beautiful countryside. Here live 1,400 people between 1,000 meter high mountains and the fjord. During the mild summers and the snowy winters you can enjoy a swimming pool, a small ski area, a museum, hotels, guesthouses and a horse farm. There is also a small hospital, a church, monuments and works of art, two petrol stations, a service station, supermarkets, small shops, banks, restaurants and an incredibly charming café.

The biggest employer is a herring processing plant. Neskaupstaður is well-known among heavy-metal fans. This is the sight of the yearly Eistnaflug festival.

If you want to go to the next fjord, the Mjóifjörður, you can either drive back inland, and take the next turn-off back towards the sea or you can take the ferry from Neskaupstaður. Mjóifjörður is a very natural and undisturbed region. There are a few homes, a guest house, a restaurant, a lighthouse, a church and a petrol station.

Next on the route is Egilsstaðir, the biggest city in the east of Iceland. This city was founded as recently as 1947 and offers everything you need, including a big airport. Egilsstaðir is a transportation centre. From here you can reach all the fjords and the inland. Busses go from Egilsstaðir to the north and south and the ferry from Europe lands in a fjord near the city.

As in most villages and cities in Iceland, you´ll also find a swimming pool.

Fljótsdalshérað is the largest community in Iceland, measured by surface space. It expands from the Héraðsflói bay in the northeast to the Vatnajökull in the southwest. There are two big towns: Egilsstaðir and Fellabær. South of these two cities, located next to each other, is the lake, or better river, Lagarfljót with a length of 35 kilometres and a width of 2.5 kilometres. According to legend a sea monster lives in this lake. Located east of the lake is the biggest forest in Iceland. There are a few small villages along the shores of the Lagarfljót. The biggest dam in Europe was built to the south of the lake. At the southwestern end you´ll find the waterfall Litlanesfoss and not far away the fourth largest waterfall in Iceland, the Hengifoss. If you continue along the road towards the south, you´ll get to the Highlands and to further waterfalls, thermal area, the glacier Vatnakökull and the volcano Snæfell.

Coming from Egilsstaðir, driving east across a pass, you reach the picturesque town of Seyðisfjörður. Hundreds of tourists arrive here every week by ferry from Denmark and the Faroe Islands. Besides the beautiful landscape amidst high mountains and the fjord, this historic town shines with its wooden buildings. The blue church and the technical museum as well as hiking, diving, kayak and bicycle tours are the highlights. Several festivals turn the town upside-down every year.

To reach the hikers paradise of Borgarfjörður, you leave Egilsstaðir and drive 70 kilometres along an unpaved mountain pass. Starting at a campground, countless tourists hike the various paths and enjoy the many facets of nature and stop by one of the cabins. More than twenty bird species can be seen in the area – among them the puffin. Under the cliff Álfaborg is the home of the Icelandic queen of elves. There are many myths about this region.

Coming from the mountain pass towards Egilsstaðir, you can turn off across the river LagarfIjót after a few kilometres to discover the land that is situated between two glacial rivers. Alternatively, you can drive on the Ring Road and, a few kilometres after Egilsstaðir and before reaching the river Jökulsá á Brú, turn towards Húsey on the 925th street. Along this road you´ll find a few horse stables offering tours through the scenic east. At the end of the road is Húsey, where you´ll find a hostel and a breath-taking view of the landscape.

You can reach the last of the eastern fjords, the Vopnafjörður, either via the 917th street, that turns off the Ring Road right after the river Jökulsá á Brú, or via the 85th street, about 80 kilometres behind Egilsstaðir. The first alternative is more strenuous to drive and sometimes closed during the winter months. In Vopnafjörður you can go fishing for salmon, hike and visit the swimming pool in Selárdalur. The peat farm Bustarfell is one of the oldest and best maintained in Iceland. It is located south of the Vopnafjörður on the 85th street.

Continue along the 85th street from Vopnafjörður to visit the northern fjords.